When we won tickets to a Six Flags park, hubby had to work, so I was on ‘ride duty’ with our son, whose thirst for adventures involves everything that spins, flips upside down, drops 10 stories in five seconds or races at breakneck speed. My idea of a thrill? The merry-go-round.

But I sucked up my anxiety and braved a bunch of rides, eyes clenched shut, white knuckles on the (hopefully) safe barriers while desperately praying not to lose my lunch or die. Happily, I survived, but just barely. Then, during a trip to Universal Studios Orlando, I instantly regretted strapping myself in for the 3D immersive ‘experiences’ that nearly sent me over the edge. Afterwards, stomach quaking, I set out to discover coping strategies, tactics, and remedies to deal with motion sickness.

For parents who want to enjoy the day rather than heave over a trash bin, here are some (surprising) ways to handle motion sickness.

1. Motion sickness starts in your head.

People tend to feel dizzy or nauseated on rides because our brains receive conflicting messages from the motion-sensing organs in our bodies, including our inner ears and eyes, says Dr. Davidson Hamer, Professor of Global Health and Medicine, at the Boston University School of Public Health and School of Medicine.

“Motion sickness is actually a syndrome: various sensations can trigger your autonomic system, leading to a combination of sweating, flushing, vomiting,” he explains. Because our bodies naturally defend themselves against perceived threats or poisons, if the brain senses that unusual motion doesn’t match what we’re seeing or feeling, our center of balance —called the vestibular system—swings out of alignment, and the mind goes on red alert, thinking it needs to get rid of the toxin, pronto.

Many travel guidebooks, websites and forums rate the intensity of major amusement and theme park rides and attractions so parents can decide which ones are appropriate for their kids (and themselves!). Read up, and cross off the ones that refer to steep drops, intense movement and spinning or 3D motion simulation.

In general, swaying and spinning rides are the worst culprits for triggering motion sickness. Because your brain has time to register the effects of a roller coaster’s twists and turns, that type of ride is more tolerable for people prone to motion sickness (unless the ride is packed with inverted loops).

It may sound counter-intuitive, but you’ll feel worse riding on an empty stomach, says Dr. Hamer. Snacking on small portions of soda crackers, bread or other bland, high-carb, low-fat foods helps if you’re prone to motion sickness. But avoid alcohol and try not to eat right before going on an intense ride.

Spicy or acidic foods will further irritate your tummy, so avoid them, says Dr. Trevor Cates, a Naturopathic Physician in Park City, Utah.

“Highly processed, fatty and high sugar foods seem to be more of a trigger,” she says, adding that drinking carbonated sodas to soothe motion sickness is a no-no. “While the carbonation is good, the sugar is not, so drink carbonated water instead,” she says. “Also, try taking a ginger supplement before getting on a ride, or chew on candied ginger.”

Many people swear by ginger’s natural properties to effectively reduce feelings of nausea, and whether you consume it raw and chopped up into small pieces, or in gum or pill form, it’s a readily available option for queasy ride-goers.

Related: 9 Things You Should Never Do at an Amusement Park

4. Put some pressure on yourself — acupressure, that is.

Although the science isn’t conclusive, I’ve found acupressure bands to be lifesavers on cruise ships and boats, so I plan on never going on a ride without them again. I love the Sea-Bands.

The acupuncture point known as Pericadium 6 has been associated with alleviating nausea—find this spot on the inside center of your wrist, about an inch up your arm. “There’s also a pressure point you can massage, located in the web of your hand between your thumb and pointer finger,” adds Dr. Cates.

5. In the middle of a ride? Keep your head on straight. Literally.

To diminish those conflicting messages being sent from your brain to your body, keep your head and neck straight and square to your shoulders, rather than tilting it to the side or towards your chest, says Dr. Hamer.

“Also, sitting in the middle of a ride tends to be better than the sides, where you’ll feel more of the swaying and rocking motions than on the sides,” he adds. For the most stable ride on a roller coaster, sit in the middle row of cars; you’ll feel way more in the front or last rows.

You may be able to prevent or reduce motion sickness by making sure your eyes see what your inner ear feels. You’ll get dizzier if your eyes are looking all over the place, so close one or both eyes to get some relief, says Dr. Cates. “Closing your eyes and looking out the front rather than side windows in a car actually can help, and the same is true on rides,” says Dr. Cates.

That’s because when a ride begins to rock, spin or drop, our eyes and inner ears transmit disorienting information to our brains, leading to our friends Dizzy and Queasy.

“By closing your eyes, you’re eliminating at least the visual portion of that,” explains Dr. Hamer. “You’re still not going to be able to eliminate everything, but at least you can cut down on one stimuli that combine to trigger the reaction.”

On a roller coaster, try staring at the head in front of you. Take slow, deep breaths and concentrate on each one while focusing on calming your mind and relaxing your body, adds Dr. Cates.

When all else fails, an antihistamine like dimenhydrinate (also known as Dramamine) will likely quell your ills by blocking the receptors in your noggin associated with nausea and vomiting. Dr. Hamer notes it can make you a little drowsy, though. You can also try a slow-release anticholinergic drug like the Scopolamine patch, which looks like a small round bandage and is placed behind your ear. Tip: Pop the dose of antihistamine 30 to 60 minutes before you intend to ride or four hours earlier if you’re using the patch.

And by the way, all of this advice isn’t just for amusement park rides—these tips can work on boats, cars and planes, too. Happy travels!

Montreal-based Wendy Helfenbaum is a journalist, content strategist and TV producer who writes for dozens of digital and print magazines, as well as many brands. Wendy loves cruising, adventure travel and venturing off the beaten path with her husband and teenage son, and she can pack a carry-on bag like nobody’s business. Follow her @WendyHelfenbaum.

• The 13 Cheapest Theme Park Hotels in the U.S.
• 12 Best Bags for the Amusement Park
• 19 Best Theme Parks in the World
• All 7 Universal Orlando Resort Hotels, Ranked
• 9 U.S. Amusement Parks Kids Should Experience Before They Grow Up

Our team of parents and travel experts chooses each product and service we recommend. Anything you purchase through links on our site may earn us a commission.

12 Best Bags for the Amusement Park

19 Best Theme Parks in the World

The 13 Cheapest Theme Park Hotels in the U.S. 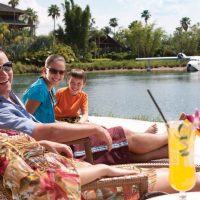 Get expert advice, handpicked recommendations, and tips for your family all year round!

Get family travel & tips from our experts

Thanks for signing up!